Early days Midway Surf Life Saving Club was incorporated in 1952. The club was formed as a breakaway group from the existing Waikanae Surf Lifesaving Club. The driving force behind this was Jack Griffen supported by a group of older members from Waikanae. These foundation members were mostly returned servicemen from World War 2.

The principal reason for forming Midway was the growth of the Churchill Park Motor Camp on the old Gisborne jail site nearby. This was the largest motor camp in the Gisborne area and it was always very full at weekends, school holidays, and the Christmas New Year period. There had been drownings in this area.

Milestones The clubhouse was then three old army surplus huts joined together. As Centennial Marine Drive developed, and with more available public parking, this area became the most popular place for public swimming and family activities. This meant Midway surf life savers were required to carry out more patrolling, with greater service. This expanded to the point that the old army huts were insufficient as a lifeguard base.

In 1963 a building programme became essential and in 1964 the current building was built about 200 metres west of the original site and directly opposite what is now the Olympic Pool complex. Since 1964 it has been necessary to extend the original building adding more member changing and toilet facilities and extended gear storage areas to meet expanding demand. 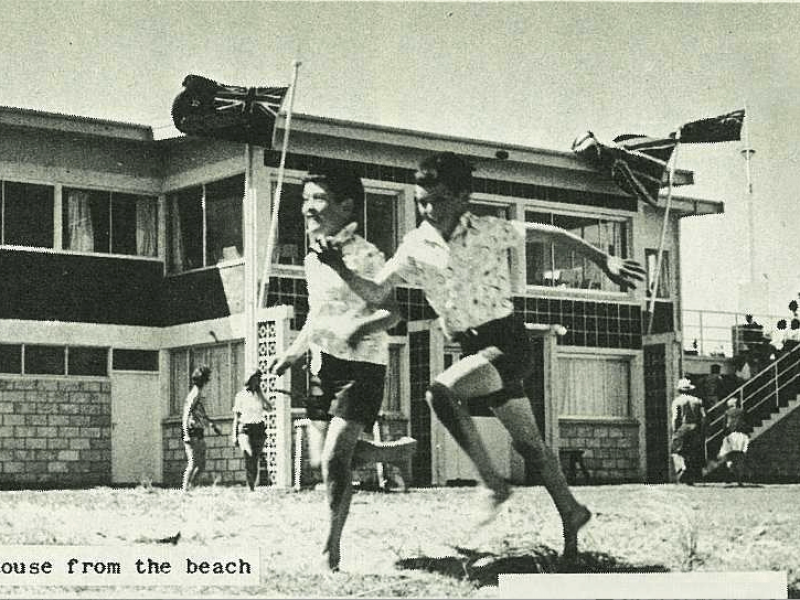 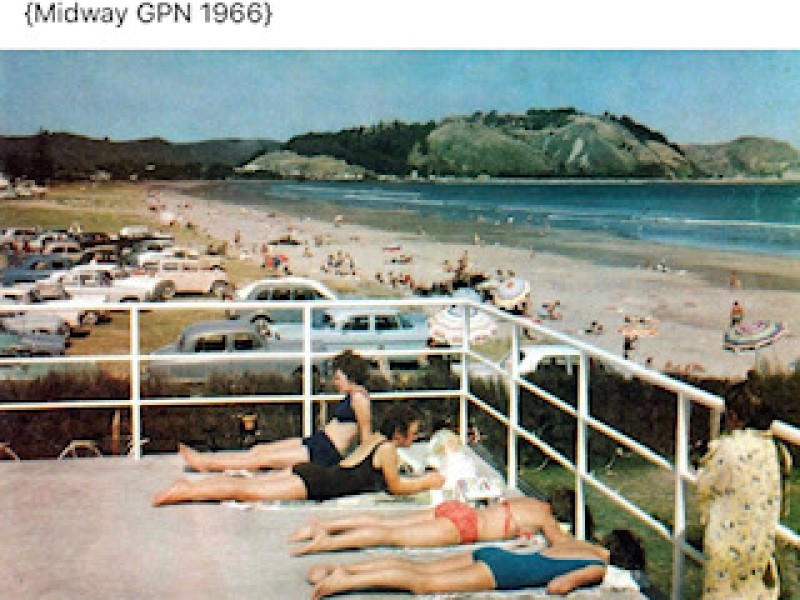 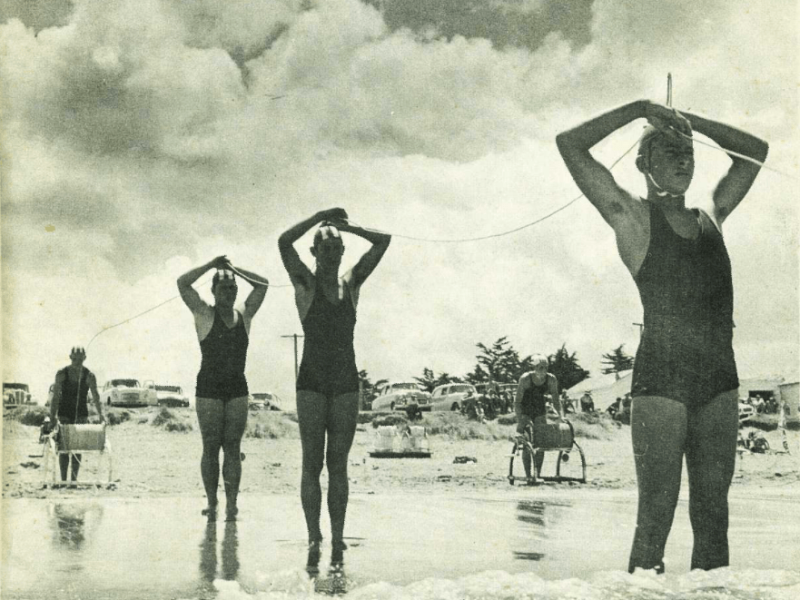 The Midway Surf Life-saving Club's new £18,000 clubhouse was officially opened by the Mayor, Mr H. H. Barker, during Labour weekend. The building, in addition to providing the club with modern facilities, contains a lavish cabaret - conference hall, public toilets and changing sheds, a shop, and a sun deck. Its completion was the culmination of 14 years' fund raising by members of the club. The building has been described as the most impressive surf club structure in Australasia.

Community During these developing times Midway grew into an organisation that has become respected for its direct community involvement and outstanding contributions to Gisborne. For example, members provided considerable support in evacuating families and public from danger during Cyclone Bola. Members have provided lifeguarding backup for numerous community water-based sports such as waka ama regattas, triathlons, and public events. At the same time the club was developing leadership pathways for members who were contributing to the community in a number of areas. One member served as a three-term councillor for Gisborne District Council. Another member did three terms as chairman of New Zealand Surf Life Saving. Two active members were awarded life membership of Surf Life Saving New Zealand – the ultimate accolade.

Rescues For 68 consecutive seasons, Midway has patrolled the beach every Saturday and Sunday and on statutory holidays from the beginning of November until the end of March. Every season presents different challenges brought about by changing weather conditions, and the number of beach goers at any time.

Boxing Day 1985 was a very warm day with extremely big surf, an onshore wind, an outgoing tide, and huge crowds. After much deliberation the patrol decided to keep the beach open and guard it by calling in extra Midway lifeguards. Over three hours they carried out 24 tough and sometimes critical rescues. In doing so the club justified its many hours of lifeguard training.

Seasons vary markedly and the number of rescues each year can vary between two and 24 as described above. Since Midways inception the conservative estimate of the number of rescues carried out exceeds 400. Irrespective of what the season produces, training, vigilance and diligence epitomise the conduct of the lifeguards. During any season numerous preventative actions are carried out by the patrols as they keep the public informed and away from danger. Each season these actions number in the hundreds.

Sporting success The training and fitness of Surf Lifeguards is paramount to their ability and performance in rescue situations. Midway patrols attended their first national championships at Waihi in 1955. It took until 1971 for Midway to win its first national title.

Since then, Midway has won various titles at every national championships. At the 1981 New Zealand National Championships Midway emerged with the coveted Allan Gardener Memorial Trophy signifying it was the top club in New Zealand. Midway enjoyed a golden era in 2004 - 2014 when it became overall New Zealand champions six times, and runners-up on four other occasions. In the 1990's in two international tests versus Australia, Midway surf life savers made up eight of the 15 person New Zealand team.

Midway continues to have members selected for national teams. On four occasions Midway members have captained the New Zealand team at the world championships.

Next chapter In an ever changing social, climatic, financial, and political environment Midway continues to build on its proud history preventing injury and death on Midway Beach. It continues to produce well-rounded, mature and responsible citizens capable of making a significant difference to whatever communities and businesses they are involved with.

The club has identified some demanding social and community changes for future beach usage which will require intensified and different responses. For example, the proposed redevelopment of the Olympic Pool Complex, the extension of the cycle-walkway as far as the Waipaoa River mouth, and increasing use of the campervan park on the corner of Centennial Marine Drive and Pacific St. All of these activities are increasing public use of a large extension of Midway's patrolling area and responsibilities.

Midway’s response to these developments requires new approaches, more lifeguard rescue equipment, and the constant recruitment and training of active lifeguards. A critical enabler for Midway to deliver what’s needed is a fit-for purpose building that has the structure and capacity to train lifeguards, be effective as a lifeguard operations centre, and somewhere to securely store greater and more valuable lifeguard equipment. In 2020 Midway Surf Life Saving Club successfully applied for $5 million from the Covid-19 Response and Recovery Fund to build a new multi-purpose facility. The new building will house the Midway Surf Rescue Community Hub, a lifeguarding tower, member’s lounge, training room, first aid room, a beach-facing kiosk, and a restaurant.

Redevelopment of the club building signals the beginning of the next exciting phase of Midway Surf Life Saving Club and the Gisborne community. 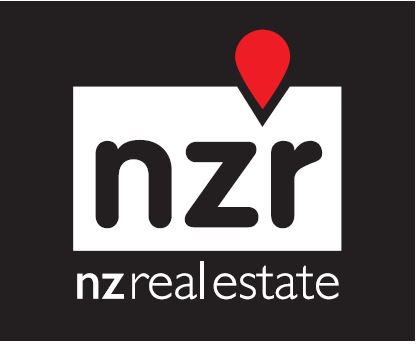 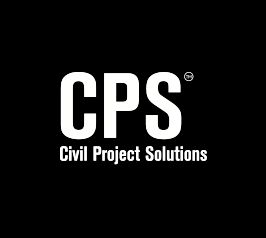 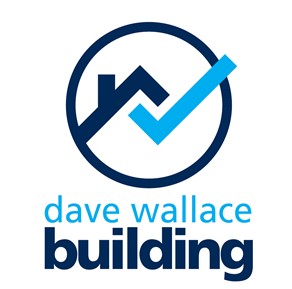 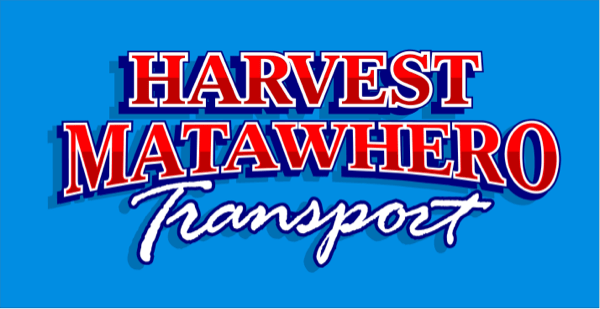